The great thing about Disney is the sheer volume of Intellectual Property they own. For Disney fans, this means there’s never long to wait until the next movie is released with the stable including Pixar, Marvel, Star Wars and Walt Disney Studios.

Over the past couple of weeks, I’ve been fortunate enough to go to the cinema three times. Without consciously thinking about it all three movies I caught were Disney owned (mercifully I was able to avoid Mamma Mia 2!)

One Pixar, one Marvel, one Walt Disney Studios. Perfect.

First up is a film I was super excited to see, Pixar’s The Incredibles 2.

Now, there’s often accusations thrown at Pixar that they don’t have any new ideas anymore. Frankly this is nonsense. Over the past few years we’ve been introduced to Arlo in The Good Dinosaur, been carried on a range of emotions with Riley in Inside Out and sang and cried with Miguel in 2017’s superb Coco.

It is fair to say Pixar have created a lot of sequels (or prequels) too, some better than others. But I thoroughly enjoyed Finding Dory, Cars 3 (better than Cars 2 in my opinion) and Monsters University too. I love getting the chance to revisit and spend time with familiar and loved characters.

So when the new logo for The Incredibles 2 was displayed at the 2015, D23 Expo in Anaheim the excitement and anticipation went through the roof.

Fast forward 3 years and I was sat in a cinema in Essex ready to see what Mr Incredible, his wife Elastigirl and their children had in store for this much hyped sequel.

I was not disappointed. In a clear shift in policy by Disney that will likely see more diverse leads in their films from now on, Mr Incredible becomes a stay at home dad whilst Elastigirl gets to chase her career and the bad guys as she becomes the main hero.

The film gives Elastigirl a more prominent role although there’s plenty of humour when we get to see how Mr Incredible is adjusting to his new life sorting the kids out, including of course the latest addition to the family Baby Jack-Jack who is showing developing super powers too.

The mission for the super heroes is clear, Elastigirl is on a mission to make Supers legal again after they get banned for causing too much damage. Old friends Frozone and Edna Mode appear too to help the family out along with a rag tag bunch of other super heroes who become heavily involved in the plot as the movie progresses.

For a film that is over 2 hours long it absolutely zipped by and was thoroughly enjoyable. Visiting the cinema with two adults, two teenagers and two younger children there aren’t many movies that could be enjoyed equally by such a wide cross section of people. But my family all loved it.

In fact, in my opinion I actually preferred it to the original. It is already the 3rd highest grossing animated movie of all time. And absolutely deserved too.

THIS is why Pixar make sequels! Superb!

Ant-Man and The Wasp

Next up, just a few days later and in order to escape the oppressive 32 degrees Celsius temperatures I was back in the same cinema watching another super hero film. Although massively different obviously!

Yes, from the Marvel stable was the sequel to Ant Man starring one of my favourite comic actors of all time Paul Rudd.

I feel that the original Ant Man was underrated. Obviously Ant Man is not one of Marvel’s bigger characters, figuratively and metaphorically, but I enjoyed the first one very much and so I was more than happy to go and catch Ant Man and The Wasp.

The film sees Scott Lang under house arrest and just days away from having his tag removed and hisf freedom restored. Of course it’d be a dull film if he didn’t get removed from his house before the end of his sentence. But that’s what happens and Ant Man joins forces with The Wasp (played by Evangeline Lily) in order to rescue her mother who went sub atomic 30 years earlier and is living in the quantum realm.

However it’s not as simple as that as a various people get in there way of have ulterior motives with how to use the technology that The Wasp’s father, Hank Pym (Michael Douglass) has developed to find his wife, mainly a ghostly figure who is quantumly unstable.

What 8 enjoyed about this film is the level of humour throughout. It doesn’t take itself as seriously as some other super hero movies and the character interactions are great. Theres just enough peril to make it exciting and the film whizzed by.

After the closing titles, there’s also an extra scene that leaves many, many questions to be answered but one that fits into the overriding story arc of the Marvel universe.

This was another movie that I was super excited to see. We even held off seeing other movies in order to see this on release day in the UK.

The movie is set after World War 2. Christopher Robin, a veteran of that war, is now a married man, with a daughter and stuck in a job he probably hates.

The classic characters are all here, Pooh, Piglet, Eeyore, Tigger, Kanga, Roo and Owl. Pooh tracks down Robin in London and gets help, reluctantly, in order to find the rest of the gang in the 100 Acre Wood. The gang then try to help Christopher Robin by returning his important paperwork to him in time for his meeting.

There’s some truly beautiful, touching and emotional scenes in this movie. Some of the interactions between Pooh and Robin are beautiful too. 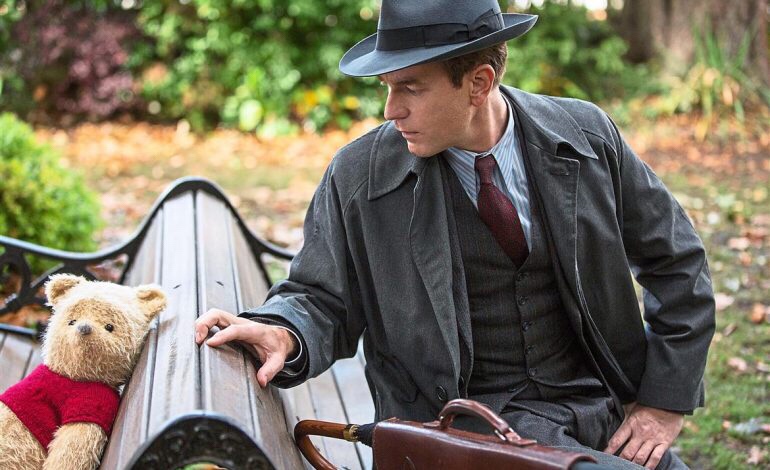 For me though, the film is not as easy a watch as it should be. At least not for young children. We took our 5 and 7 year old daughters and the slightly depressing opening, followed by being filled in on Robin’s back story was not exciting enough to engage them. They were a little restless. Perhaps the appeal here isn’t to a younger audience?

That’s not to say this is a bad film, overall I enjoyed it. But I do feel like Disney missed a trick with this one. It could have been more fun.

Yes the moral of the story is a good one. Yes the connection between Christopher Robin and his old buddies feels authentic and real. But it takes too long to become really interesting which is a shame as the last third of the film is excellent (and in fact saves this movie from being a dud.)

Overall a slight disappointment, but still one worth watching. And I’m sure if you grew up watching Winnie The Pooh then you will appreciate this film on some level as it I’ll bring the memories flooding back.